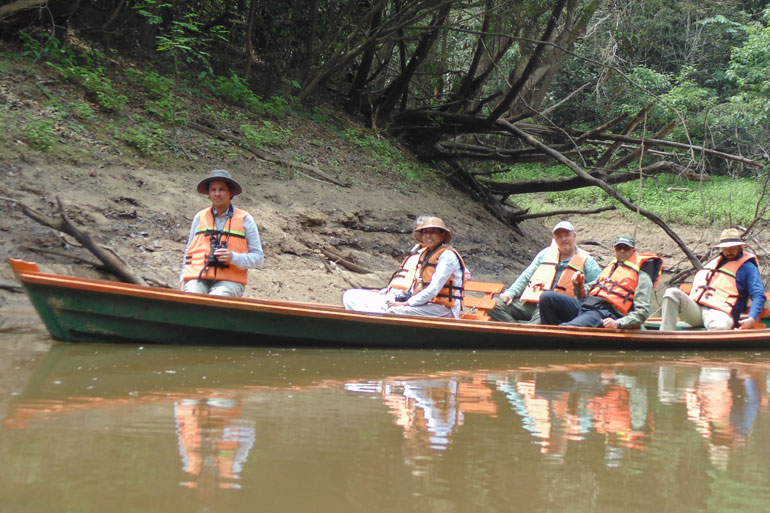 Birdwatching on the Amazon – Photo by Jaime Erazo (EI)

Ecotourism is a model that has, through various examples worldwide, helped to stimulate local economies through sharing indigenous knowledge with scientific research, all while providing unique visitor experiences to more adventurous tourists looking to stray off the beaten track.

The GROW Colombia project led by Federica Di Palma, Director of Science at Earlham Institute, has several goals – one of which is to foster a sustainable bioeconomy in Colombia. As such, involvement in this skill sharing trip to Leticia and Puerto Nariño in Colombia was a starting point toward a wider UK-Colombia collaboration on evaluating and further developing sustainable tourism, as well as expanding research into biodiversity conservation in the region.

The four day expedition saw Jaime travel the Amazon alongside important partners, including Fundacion Omacha, WWF Colombia and British Ambassador Dr. Peter Tibber, who tackled a swathe of topics while ingratiating themselves with the Colombian rainforest landscapes, organisations and people.

Adventures in the Amazon

On day one of the expedition, the team loaded up the boats and set off down the Amazon River ahead of a jam-packed few days of workshops, nature walks and meetings with indigenous communities and organisations.

The evening of the first day was a great opportunity to see some of Colombia’s staggeringly beautiful and diverse rainforest wildlife, one of the prime draws for people seeking out ecotourism destinations. The night walk turned out a whole range of fascinating creatures, from colourful poison dart frogs to marauding giant harvestmen and terrifying tarantulas.

Day two began with a spot of birdwatching along the Amazon river, before the first cultural exchange with the Mocagua community of the Calanoa reserve, where the Calanoa Foundation aims to preserve the cultural and biological diversity of the region.

One avenue being explored with the Mocagua community is “art for conservation”, expressed through a project whereby members of the community paint houses with nature-inspired murals relevant to families’ indigenous clans.

Later that same day the group visited Maikuchiga Global Solidarity monkey sanctuary to see first hand their monkey rehabilitation and conservation programme – another way that the local economy can work hand in hand with preserving biodiversity.

The next day featured an exciting chance to see one of the highlight species of the region, the pink river dolphin, along with partners Fundacion Omacha. Charismatic species such as these can act as a huge draw for tourists looking to enjoy biodiversity, therefore conserving them and their habitats is of vital importance for our continued appreciation of their existence.

As such, in Puerto Nariño the group launched a responsible sighting guide for river dolphins, while also getting hands-on by capturing, tagging and re-releasing an individual dolphin with a GPS tag that could help monitor sustainable tourism activities for dolphin sighting.

Socioeconomic development is a major thrust of the GROW Colombia project. How do we conserve the rainforest while ensuring that livelihoods are not negatively impacted upon, particularly in a post-war economy where deforestation, if anything, has increased?

How can we harness the intrinsic value of biodiversity while benefiting local communities, making conservation more sustainable as a livelihood than farming or ranching, for example?

Ecotourism is one method, harnessing the unique aspects of the biodiversity of certain regions and ecosystems, including unique and interesting species such as the river dolphin.

Done properly this has the potential to reduce poverty, as long as local communities are properly involved, while also reducing negative impacts on biodiversity such as deforestation. On the other hand, there are examples where touring companies have deteriorated cultural heritage, while pushing unsustainable practices in certain regions.

It’s important, therefore, to study different types of ecotourism and their effects on ecosystems and indigenous populations. If ecotourism is negatively affecting biodiversity and/or local populations, then it can hardly be called sustainable.

The GROW socioeconomic programme, led by Earlham Institute and the University of East Anglia (UEA) in collaboration with key Colombian partners, presents a great opportunity to evaluate different ecotourism practices, addressing specifically those that can contribute to biodiversity conservation and poverty reduction.

A greater understanding of the biodiversity of different regions can even help to identify further activities for ecotourists, who may be interested in birdwatching, botany or other natural attractions, with which Colombia – as the second most megadiverse country in the world – is teeming.

Through GROW it is also possible to evaluate the use of alternative, sustainable cropping practices for the region based on non-timber forest products and Amazonian fruits.

Furthermore, there is a great potential to include indigenous knowledge of forests and ecosystems, as well as their unique biodiversity, in research endeavors, especially when venturing into areas previously relatively untouched by science.

The ultimate goal would be to integrate ex-combatants into some such programmes, training them in conservation activities and, through research into biodiversity tied with sustainable economic development, help to maintain lasting peace in Colombia. 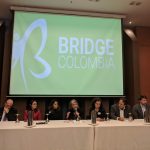 BRIDGE Colombia Day 2018 in association with COLCIENCIAS and NERC 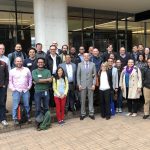 A data revolution to drive economic growth in Colombia